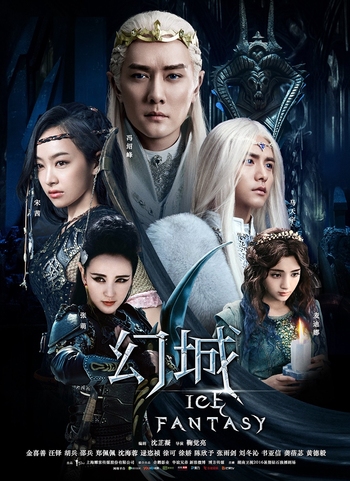 White Hair, Black Heart ... Or is it the other way around?
Advertisement:

Ice Fantasy (幻城, Huàn Chéng, literally "City of Fantasy") is an epic 62-episode Wuxia Fantasy Drama made in 2016. It's available on Netflix in Europe and the US. It can also be watched on Viki

Primarily, it's a tale of two brothers. The story consists of several arcs.

Ka Suo, the prince of the elf-like and magical Ice Tribe (or Clan), despite being one of the best warriors of his people, is also a day-dreamer who really only wants to be left in peace and free from his royal obligations. However, when their ancient enemies, the Fire Tribe, attacks the city of the Ice Tribe and destroys its main protection, the Ice Curtain, his old life is over. Accompanied by his Love Interest, the mortal Kingdom Guardian Li Luo, and his younger brother, Ying Kong Shi (called Shi), Ka Suo must leave his home for the first time and embark on a quest to the Mortal Kingdom to collect the six leaves of the Six Leaf Ice Crystal, the only means to restore his tribe's safety and ensure its survival, which in earlier times have been given to various other tribe leaders. While he's away, the Fire King takes over the throne of the Ice Tribe's City and unifies by force the Three Kingdoms; he also sends his daughter, Princess Yan Da, to stop Ka Suo from finding the Six Leaves and take them for herself by any means necessary.

The second arc concerns the efforts to crown a new king of the Ice Tribe, which brings about a deadly competition between brothers Ka Suo and Shi and their respective supporters; tragedy ensues and leads to the next arc, concerning a new and even larger quest: To find the Hidden Lotus, a powerful object that is the only means by which the consequences of the earlier brotherly conflict can be mended. The last arc, finally, concerns the aftermath of this quest and brings the story back around to its beginning.

Interestingly, the world of Ice Fantasy seems to be influenced largely by Western Fantasy staples such as The Lord of the Rings or even A Song of Ice and Fire instead of by Chinese literature, although Wuxia tropes such as the use of Wire Fu and the presence of Kung Fu Wizards fighting a Red Shirt Army certainly abound. There are mermaids, unicorns and all manner of monsters; there's true love to be found and lots of growing up to do (occasionally very speedily). The series is also notable for its generous use of CGI (the results of which are sometimes gorgeous, sometimes rather less so), sprawling sets, and a pretty, pretty cast. Even so, Mood Whiplash is a thing in this series, and it might not work for everyone.

The series was followed by Ice Fantasy Destiny set in 2020 with some of the actors returning to play the modern Reincarnations of their characters.

Examples found in this series: