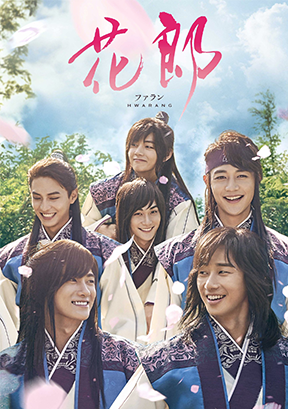 Hwarang: Warrior Poet Youth, or just Hwarang is a 2016 South Korean Historical Drama, set in the Silla kingdom. Years after the death of the King, Queen Jiso has been ruling the kingdom as regent. Fearing the possibility of nobles usurping the throne, she creates the Hwarang, a new elite to serve and protect her son, King Jinheung. Unbeknownst to the queen, however, among the young nobles who take on training to become warriors, hide two outsiders: Dog-Bird, a commoner with no name who wants to kill the king to avenge his best friend, and none other than the queen's son, King Jiheung, who has been forcibly hidden from the public by his mother and takes advantage of it to confront his mother for his lack of freedom and agency.

The drama is notorious for its All-Star Cast, which includes Park Seo-joon as Dog-Bird, Park Hyung-sik as King Jinheung, Shinee member Minho and BTS member V, with the latter providing the theme song "Even if I Die, It's You" along with fellow BTS member Jin. However, the series failed to live up to commercial expectations.