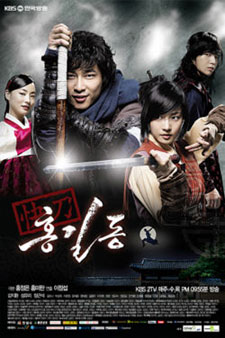 In 2008, The Hong Sisters decided to try their hand at a sa geuk, or historical drama. Being who they are, however, their attempt morphed into an anachronistic comedy littered with toilet humor, gag words, and ridiculous puns. Hong Gil Dong (쾌도 홍길동, lit. Sharp Blade Hong Gil Dong) is the result.

Based on a novel

published during the Chosun era

, the story tells of Hong Gil Dong, the illegitimate son of a (political) minister who settles into a life of professional laziness, after being discouraged by his father. He gets the call and tries to repeatedly run away to China. In a weird twist of fate, his jealous half-brother In Hyung attempts to frame him for theft, and ends up framing him for murder. In his efforts to clear his name, Gil Dong gets framed some more, and later becomes leader of Robin Hood-like bandit group, Hwal Bin Dang.

Gil Dong's heroic efforts are repeatedly thwarted by King Incognito Lee Chang Hwi who, after escaping an assassination attempt to China years ago, is back to reclaim his throne from his half-brother Kwang Hwi. Chang Hwi's methods are less than honorable as he tries to avenge his mother's death and return to his rightful place. His encounters with Hong Gil Dong force him to reexamine himself.