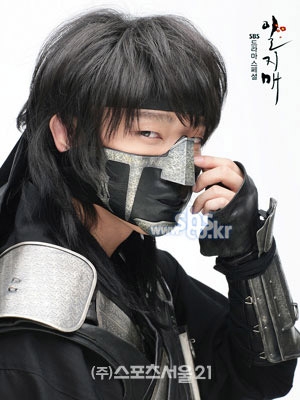 This is Korea. They don't have ninjas; they have really, really good thieves.
"Don't worry, I can steal anything. After all, I'm Il Ji-Mae."
Advertisement:

Corruption and oppression in Korea during the time of the Qing Dynasty is Serious Business. The rich and powerful shed the blood of the innocent and just. And that's the good news. The bad news is that it's all about to get worse. And the family of one poor little boy is caught smack dab in the middle.

Il Ji-Mae is a Korean drama detailing a boy's growth and maturation into a hero against a spoiled government. Sure, the emperor seems like a nice guy, but his field of vision amounts to diddly squat, and the noblemen do as they please and take what they want. It's a little overacted, but the characters—just about ALL of them—are unique and engaging, and the story has more Character Development, plot twists, and Crowning Moments than you can shake a stick at. A very fine project that shows Korea's got chops of its own. Watch out though, some kink in Korean television scheduling puts each episode at over an hour without commercials, and there's a full season of them, so once you get started, fans suggest you get comfy.

Advertisement:
This show includes examples of...