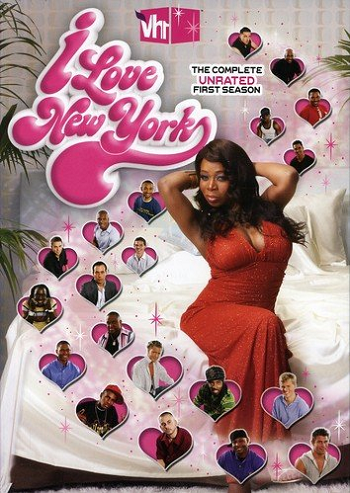 I Love New York (2007-2008) is a VH1 reality television series. It features Tiffany Pollard (better known as "New York") in a quest to find her true love. The series is a spin off of another relationship competition series, Flavor of Love, which featured Pollard as a finalist in two consecutive seasons.

Whereas Flavor of Love tried to redefine Crazy Is Cool, I Love New York stays firmly in So Bad, It's Good territory. It's in every way a Distaff Counterpart to Flavor of Love: expect the lineup of hot men to get into catfights, burst out crying, do each other's hair and shake their thongs.

After Tango, the winner of the show's first season, failed to deliver as New York's soul mate, the second season aired, revealing Tailor Made as New York's chosen flame. Somehow, during the taping of her latest show New York Goes to Hollywood, New York dumps him.

In addition to Pollard, a host of other individuals from Flavor of Love joined in, including "Sister" Patterson (Pollard's mother) who appeared on the show to help Pollard choose the right man. Mauricio Sanchez played New York's assistant, "Chamo," but only for the first season.

Many of the men later appeared on I Love Money, alongside girls from Flavor of Love and Rock of Love. Hilarity ensued.