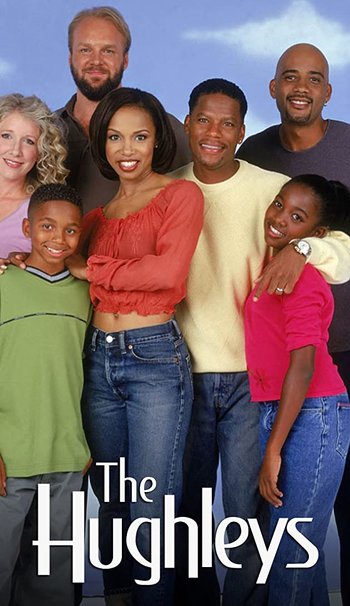 The Hughleys was a sitcom that aired on ABC for two seasons before moving to UPN. The show was your basic Dom Com starring D.L. Hughley as Darryl, a highly successful vending machine salesman who moved his family from South Central Los Angeles to a predominately white neighborhood. Rounding out the cast was his wife Yvonne (Elise Neal), his daughter Sydney (Ashley Monique Clark), his son Michael (Dee Jay Daniels), his best friend Milsap (John Henton) from "the old neighborhood", and his white neighbors, married couple Dave (Eric Allan Kramer) and Sally (Marietta De Prima).

The show mostly revolved around the conflict of Darryl experiencing upward social mobility and getting rich while leaving his mostly black poor neighborhood behind. There was a constant focus on Darryl trying to maintain his blackness and connections to his culture while dealing with living in a white neighborhood and dealing with common racial microaggressions.

The show was canceled by ABC after two seasons after ABC revamped the TGIF block. It then moved to UPN and aired for two more seasons before ending after the fourth season.

See black•ish, for a similar concept (show starring a Black comedic actor dealing with staying connected to black culture after becoming wealthy) to considerably more success on the same network, no less.

Tropes included in this series are: