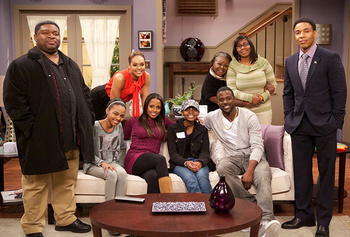 Tyler Perry's House of Payne is an American comedy-drama television series created and produced by playwright, director, and producer Tyler Perry. The show revolves around a multi-generational family living under one roof in Atlanta led by patriarch Curtis Payne and his wife Ella. While it is primarily a comedy, House of Payne is known for featuring dark themes and subject matter, such as substance abuse and addiction.

The series began with a 10-episode syndicated run and was greenlit by TBS for 100 episodes, an unprecedented number for a new series. The series would run from 2007 to 2012, airing over 254 episodes by its eighth and final season—the largest number of episodes for any African American sitcom.

A short-lived sequel series, The Paynes, premiered on the Oprah Winfrey Network on January 16, 2018.

In February 2020, the show was announced to be returning with new episodes, airing on BET as opposed to TBS.

The inaugural BET season completely ignores The Paynes and picks up where the story left off in 2012, despite the eight year time gap. In-universe, it appears that very little time has passed.