Series / In the House 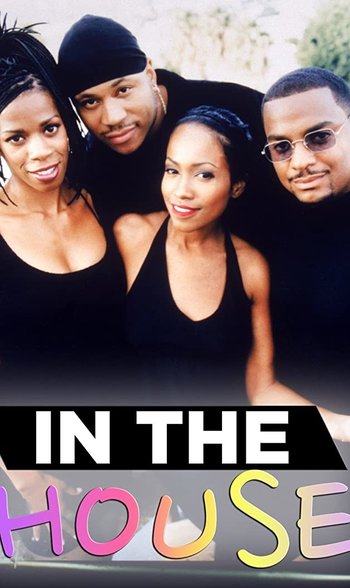 In the House is a 1995–99 sitcom that aired on NBC for its first two seasons before a Channel Hop to UPN. The series was an attempt by NBC to re-capture the magic and success of The Fresh Prince of Bel-Air (which was winding down its run) by using the same formula: hire a popular rapper, surround him with more capable actors, and put him in a sitcom.

The series starred LL Cool J as Marion Hill as a former NFL football player who's been sidelined by injuries and unable to play. In order to make ends meet, he ends up renting out some of his rooms to newly divorced single mother Jackie Warren (Debbie Allen) and her two kids, Tiffany (Maia Campbell) and Austin (Jeffery Wood). Also part of the main cast was Lisa Arrindell Anderson as Jackie's demanding boss. The first two seasons relied heavily on the Odd Couple dynamic between Marion and Jackie, a little bit of Unresolved Sexual Tension between them, as well Marion getting along with her kids and becoming a caretaker/Nanny to them.

After two seasons, the show was canceled by NBC. The show then moved to UPN, and was then retooled - The series revolved around Marion's new sports clinic business, Jackie and Austin were written out as having moved out to Tennessee, Tiffany stayed to finish out her senior year, Kim Wayans (who recurred in season two as Marion's physical trainer Tonia Harris) was brought up to main character status, and Alfonso Ribeiro joined in season 3 as Dr. Maxwell "Max" Stanton and Dee Jay Daniels as Rodney as a young football expert. UPN then canceled it again after two seasons, and the final 6-episode season aired in First-Run Syndication.

Notable for also sharing a universe with Fresh Prince, Carlton and Ashley Banks guest-starred in a episode as well as James Avery reprising Uncle Phil as a mediator in a guest spot.

Tropes in this sitcom include