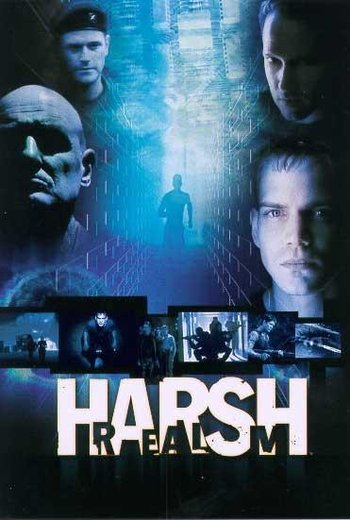 Very short-lived TV series loosely based on a comic book and created by Chris Carter in 1999 which was so thoroughly Screwed by the Network (FOX), that's hard to believe that Hanlon's Razor really applies. Nine episodes were filmed but only three were originally aired before the show was cancelled.

The story mostly takes place inside the titular Harsh Realm, a perfect VR simulation of the real world created by the U.S. military for training purposes, with the difference that in this world, a nuclear bomb was detonated in New York City, thrusting the simulation into a post-apocalyptic scenario. The main character is Lt. Tom Hobbes (Scott Bairstow), who is sent into Harsh Realm to "assassinate" Omar Santiago (Terry O'Quinn), a Major (now self-appointed General) who managed to become the dictator of 5 U.S. states in Harsh Realm. There was a lot of conspiracy and paranoia, which is not entirely surprising in a series created by Chris Carter.

Despite its short length, the show was the focal point of a major lawsuit. James D. Hudnall and Andrew Paquette created the original comic and objected to Carter having sole creator credit on the show while they weren't acknowledged at all. According to Wikipedia's page

, part of the legal battle involved noting the differences between versions, and Hudnall and Paquette ultimately getting a Suggested by... credit.