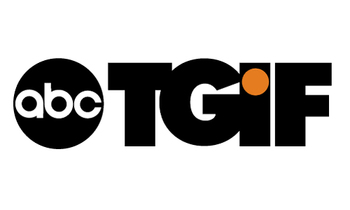 It's Friday night
And the mood is right
Gonna have some fun, show you how it's done
TGIF!
Advertisement:

"TGiF" was a comedy programming block that ran on ABC on Friday nights throughout the 90s, and then again in the early 2000s and 2010s, with its most recent resurrection being in the late 2010s. It was mostly notable in that it managed to defy the Friday Night Death Slot until changes in demographics and viewing habits spelled an end to the block shortly after the turn of the Millennium. Some of ABC's most iconic sitcoms - Family Matters, Boy Meets World and Full House ran as part of this block.

Although ABC already ran a number of hugely successful half-hour comedies in the 80s - Perfect Strangers, Webster and Full House - the block didn't get its "TGiF" identity until the very end of the decade, 1989. Other than the branding, the block continued on as normal with all programming that had been airing on that night intact, and then being joined by Step by Step, Dinosaurs and Family Matters. (And of course, 20/20 would follow it, but was obviously not considered part of the block.) During the entire decade of the 90s, the block became the dominant family sitcom programming block of all the major U.S. broadcast networks, further bolstered by ABC's Tuesday and Wednesday night comedies that included Home Improvement and Roseanne. What made TGiF particularly notable was the diverse mix in demographics that the block served - although family-oriented comedies like Family Matters, Full House and Step by Step tended to dominate the block, the block was also successful at serving older teens and young adults (particularly females) with Sabrina the Teenage Witch and Clueless as well as tween and teen boys with Boy Meets World. As the block began to age into the 90s, the programming became increasingly skewed towards the teen and young adult demo with Boy Meets World and Sabrina the Teenage Witch becoming veteran series bolstered by newcomers You Wish and Teen Angel.

Despite the shift in demographics, TGiF struggled to hold on to an audience. The same teen and young adult demo that had proved lucrative in the 90s, and was just now being sought after by other networks, was quickly abandoning television on Friday nights period in favor of other activities (namely those that took place far outside the home) and the block was starting to get hammered by a then-new phenomenon - web-based entertainment. Sabrina and Boy Meets World ended their runs while ultra-Long-Runners Family Matters and Step by Step made the Channel Hop to CBS - where those two series promptly failed. TGiF died with them, being replaced by the network's answer to shrinking audiences and web-based competition - the Reality Show. Friday night became ABC's prime reality programming night, hosting such shows as Wife Swap, Extreme Makeover and most notably today, the American adaptation of Dragon's Den, Shark Tank.

But TGiF wasn't truly dead yet! The block made a brief return run from 2003-2005, and again in 2012 and yet again in 2018. In 2003, ABC tried again with a number of comedy/"dramedy" programming spanning two hours with such shows as The George Lopez Show and 8 Simple Rules. The revival stalled for many of the same reasons that killed the block in the first place, and Friday returned to being ABC's reality show dumping ground. The third revival occurred at the end of 2012 when the Tuesday night comedy Last Man Standing was moved to Friday and paired with newcomer Malibu Country, a Reba McEntyre-based vehicle. Last Man Standing survived the move, but Malibu Country failed to survive to the end of the calendar year and all TGiF branding died with it, this time apparently once and for all. Last Man Standing would be paired with another freshman series, Cristella, which again would fail in its initial run leaving Last Man Standing Last Show Standing until paired with 2015 fall season breakout hit Dr. Ken. However, ABC elected not to revive the TGiF branding, instead simply referring to the night as "ABC's Comedy Night" ("ABC Funny" in 2016, a name shared with all of ABC's nightly comedy blocks). Meanwhile, Wednesday had become ABC's dominant family sitcom night, with The Middle, The Goldbergs, Modern Family and Blackish. For the 2018 Fall season, ABC would again move Tuesday breakout hits, this time Fresh Off the Boat and Speechless, into the Friday night slot - and this time they yet again would revive the TGiF branding with the move, although the rebranding has been even more subtle than the 2012 rebranding, effectively mentioned only in passing (its most prominent mention/celebration, in fact, being within the Fall '18 season premiere episodes of the shows themselves, with Fresh Off the Boat alluding to/spoofing original TGiF hit Full House and Speechless doing a generic 80s/90s comedy riff).

Also note that TGiF would have a more proper Spiritual Successor in the form of Disney Channel shortly after that block's first demise. Around the same time that Sabrina the Teenage Witch and Boy Meets World bowed out from ABC's airwaves, Disney Channel found success with much of the same demographic in Lizzie McGuire and That's So Raven. Since Disney Channel aimed at the extreme lower end of the same demo that had been tuning in to TGiF, they essentially had a captive audience that was too young to party outside the home Friday nights. Today, Friday night remains one of Disney Channel's choice premiere nights, and after flirting with an older demographic from 2011-2014 is now solidly in the tween and teen demo viewership. There are also many connections between TGiF and Disney Channel beyond just demographics and similar multi-cam format and style - given the number of Crossover events both TGiF and Disney Channel engaged in, most of the shows that had aired on both are now connected into a single universe known as the Disney Channel Live-Action Universe.

There's also a TGiT (Thank Goodness it's Thursday) block presently on ABC, although it has no relation to TGiF being based entirely around hour-long dramas such as Grey's Anatomy and Scandal.

Series that had aired as part of the original TGiF: