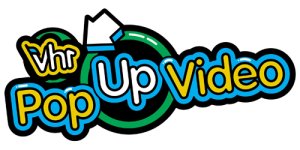 "Is this Canadian singer sex-crazed?"* "Head Over Feet"; "sex-crazed" is suggested during an item on face-reading.
"Who wanted to slap Sinéad O'Connor's face?"* "Nothing Compares 2 U"; Joe Pesci said he wanted to "slap her face".
"What haunted Michael Jackson when he first heard "Thriller"?* "Thriller"; he said the first recording of it sounded "crappy".
—A sampling of "Coming Up" questions for videos
Advertisement:

Pop Up Video is a music video anthology series on VH1.

What sets this show apart from other music video anthology shows is its use of little "info nuggets" that pop into the screen (with a distinctive "bloop" sound) during the video. Most of the nuggets feature background info and amusing trivia about the video being featured. Some also have background info marginally related to something featured in the video, and many of the nuggets add snarky commentary.

In its original incarnation, Pop Up Video ran from 1996 to 2002. Happily, it was brought back in 2011 with newer music videos and slightly redesigned info nuggets, though it disappeared again after about a year.

Before their switch to MTV Classic, VH1 Classic were quite fond of running classic episodes of Pop Up Video, although they only reran about the same sixteen episodes or so.

Tropes playing on this series: