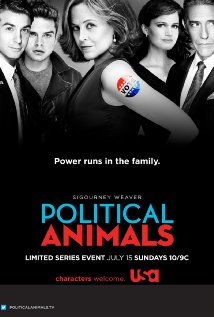 Hail To The HBIC...
Advertisement:

Political Animals is a limited series on USA Network starring Sigourney Weaver as Elaine Barrish Hammond, an American former First Lady, politician, and Presidential candidate who is currently serving as Secretary of State. This may sound familiar. The show also follows her ex-husband Bud Hammond, a former Democratic President, their twin sons, the 3 minutes older T.J. who is gay and struggles with sobriety and the workaholic Doug who is devoted to working for his mother, as well as Elaine's mother, Margaret Barrish. The series follows the Hammond family through the travails of political intrigue and awkward family life.

As of November 2012, USA Network announced that, due to lower-than-hoped-for ratings, the show would remain a mini-series.

Douglas: What's next, are you gonna go back into rehab?
TJ: (sarcastic) Because that worked so well for me in the past?