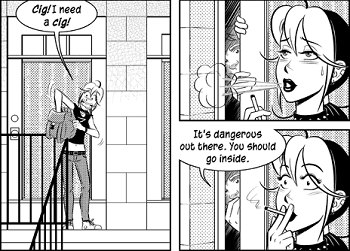 Sometimes, things get worse rather than better.
Study: 30% Of People Who Quit Smoking Relapse After Shakily Raising Cigarette Up To Lips When Agreeing To Turn State's Evidence
— Onion headline

So the world's about to end, you didn't save the girl, you did but she's about to give birth, or you just had a really bad day at work. While others might be needing a freaking drink right about now, it's not going to cut it for you. What you really need is a cigarette. Possibly 20. And sometimes all at once. This is also where the phrase "Smoke 'em if you got 'em" is likely to come in.

Stress smoking is a popular way to depict just how nervous or upset a character is, doubly so if they have previously quit and fall Off the Wagon because they cannot handle their anxiety any other way. If the only time the character lights up is when things have gone south, it's this trope. This is often spoofed in old cartoons, where a really stressed out character would be surrounded by cigarette butts, but can be used in dramatic works as well. A common method of showing stress is to show the character's shaking hands as they fumble to hold the light to the cigarette.

Somewhat of a Truth in Television, as the nicotine in smoking does (sorta) help with stress

. However, in the grand scheme of things, it's a short-term solution to a long-term problem; the user only thinks that their stress is gone from smoking, when in reality, their underlying stress has been covered up by the nicotine, not treated. Also, if they keep up the habit, they'll have to deal with the stressor of addiction.

Often goes hand in hand with Must Have Nicotine. Compare Drowning My Sorrows, Heartbreak and Ice Cream, and I Need a Freaking Drink.