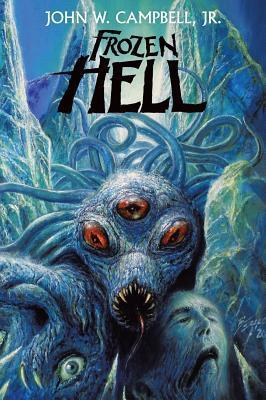 Frozen Hell is a science fiction novel written in 1938 by John W. Campbell. It's 1939 and the Garry Expedition, headed by the eponymous Commander Garry, is in the Antarctic studying a variety of phenomena from the weather to geology to biology from their central base, Big Magnet, so named because of its proximity to the Earth's southern magnetic pole.
Advertisement:

One day, a team led by meteorologist McReady and physicist Norris heads out to find what they think is a meteorite whose magnetic properties have been futzing with their instruments, only do discover a crashed, frozen UFO beneath the ice, along with the equally frozen body of one of its occupants, a blue-skinned, wormy-haired humanoid with three blazing red eyes which the group takes to calling "the Thing." Efforts to melt the ice around the spaceship only result in its accidental destruction, but McReady's team nevertheless manages to make it back to Big Magnet with the Thing in a block of ice.

Most of the staff take an intense dislike to the Thing, especially McReady, who begins having what he fears are prophetic nightmares that the creature not only isn't dead, but possesses abilities none of them can even begin to fathom. Biologist Blair dismisses this as nonsense, and insists they chip the alien out of the ice and thaw it out for study. Garry sides with him, and so that night, as everyone else is asleep, physicist Jerry Connant finds himself on guard duty in the room with the thawing Thing, freed from the ice, when he suddenly hears a floorboard creaking ominously behind him...

Campbell never published the book, but instead shortened it into a novella, publishing it in Astounding Science Fiction under the title "Who Goes There?" The original version would've remained unseen forever had author Alec Nevalla-Lee, while researching Campbell, not stumbled across the original manuscript Campbell had sent among some other papers and documents to Harvard. Following a successful Kickstarter campaign, the book has at last seen the light of day.

Its history and eventual publication are similar to Go Set a Watchman, albeit without the attendant controversy. Nevertheless, Nevalla-Lee in his introduction does wonder what Campbell would've thought of them publishing the book, and whether he would've wanted it done.

In 2020, a remake of The Thing was announced by Universal and Blumhouse. Rather than to just remake Who Goes There? again, the creators of the project are opting it to base it on Frozen Hell. As of 2022, nothing has happened.