Literature / Who Goes There? 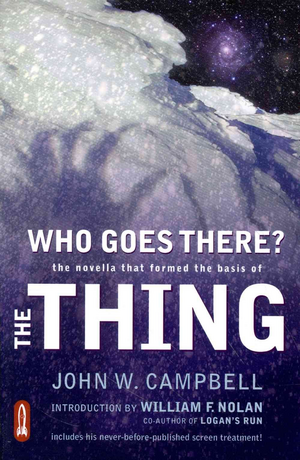 Who Goes There? is a Science Fiction novella written by John W. Campbell. Originally an unpublished full-length novel titled Frozen Hell, it was shortened and renamed and published under the pen name Don A. Stuart in 1938 in the magazine Astounding Stories. It directly inspired three feature films—1951's The Thing from Another World, John Carpenter's 1982 movie The Thing, and the latter's 2011 prequel of the same name (and more loosely inspired 1972's Horror Express)—and indirectly influenced several decades of science fiction works by inspiring other authors to rip it off. The X-Files adapted it twice, for instance, while The Terror is something of a Victorian-era homage.
Advertisement:

The story follows a group of scientific researchers in Antarctica who stumble upon an alien life form, which revives after they thaw it from the ice it's been encased in for twenty million years. The alien has the ability to assume the form, memories, and mannerisms of any living being it consumes—while retaining most of its original mass—as well as read their minds and project their thoughts. Which members of the expedition are still human, and which are alien impostors? As the ice that's keeping them isolated from the rest of the world begins to thaw, the remaining humans realize they'd better figure it out soon, because the fate of humanity is very much at stake.

Author Alec Nevalla-Lee rediscovered Campbell's original manuscript for Frozen Hell in 2018, and it was published the following year after a successful Kickstarter campaign.