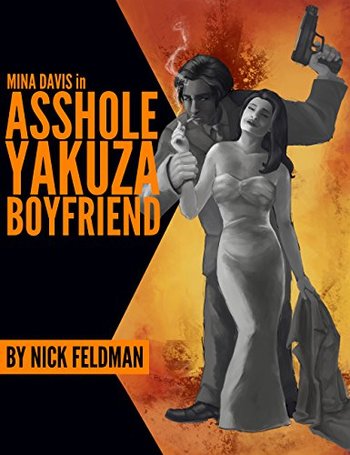 Sometimes I worry I’m not a people person. Hell, even my cat doesn’t like me.
"Shut up, Johnny. I had a late night, and I’m not in the mood. Hangover’s working me over like George Foreman’s speedbag, I barely slept, and worst of all I’m harboring half a crush on a good for nothing yakuza leg-breaker."
— Mina Davis
Advertisement:

Asshole Yakuza Boyfriend is the second Mina Davis book by Nick Feldman (after Hungover and Handcuffed), and the first novel-length Mina story. This time, Mina's looking for an abducted teenage girl and instead finds a badly wounded yakuza thug, whom she hides from both the police and the yakuza in the hopes that he'll lead her to the girl. Mostly, though, he just watches her TV and drinks her booze until the plot catches up with them.

Mina: The world isn’t black and white, obviously, but once grey goes to a dark enough shade the difference is largely opinion.