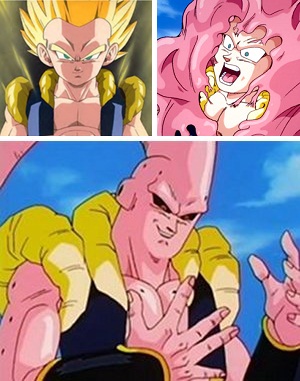 You are who you eat.
"We are the Borg. Lower your shields and surrender your ships. We will add your biological and technological distinctiveness to our own. Your culture will adapt to service us. Resistance is futile."
— The Borg Collective, Star Trek: First Contact
Advertisement:

When he beats you, he will take your abilities, your uniqueness, your everything and make them his own. He usually does this by literally absorbing or consuming you, though sometimes he'll just take the pieces of you he likes and discard the rest. Either way, the more he gets, the stronger he gets. The stronger he gets, the more people he gets. This is his motivation.

This is a common attribute of zombies; zombie hordes tend to become more dangerous the more zombies are in them, so by zombifying humans they are essentially adding that human's strength to themselves.

This trope is about the character, the article about the plot is Assimilation Plot, oddly enough. Sometimes overlaps with The Virus and/or All Your Powers Combined. Distinct from Power Copying as it requires death or injury to the other party. A form of Human Resources, assuming the victims started as human. Compare Cannibalism Superpower, You Are Who You Eat and Unwilling Roboticisation which describes methods for acomplishing this trope. The replacement by assimilation may be part of a plan to make things over In Their Own Image.

He may fall victim to Assimilation Backfire.

He can absorb people to heal damage, but the wounds inflicted by Reality energy cause him to go on a binge.

Alternative Title(s): You Will Be Assimilated

He can absorb people to heal damage, but the wounds inflicted by Reality energy cause him to go on a binge.