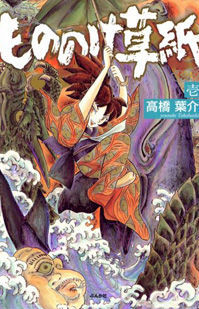 Mononoke Soushi is a weird horror manga by Takahashi Yousuke about a mononoke girl who has the eye of truth painted on her hand. She helps people come to rest and sometimes tries to save them. It can be described as: This is the story of a girl called Tenome who works as a performer at sake houses, but who has a unique ability. She has a tattoo of an eye on her hand which endows her with the ability of "second sight." Though this often comes in handy, it also complicates her life. She is constantly getting involved in situations with various supernatural creatures, such as animal spirits, kappas, and more.