Kicking Ass in All Her Finery 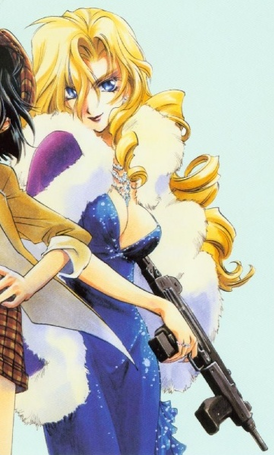 That gun is a great accessory to her glittery dress and fur cape.note From the artbook Colourful Wind by Shiki Douji
"Kim, deciding to be badass, tosses her hat into the air, and proceeds to unrealistically fly around with a series of kicks and punches despite, again, wearing the big, flowing dress."
— Linkara. Atop the Fourth Wall, reviewing "The Invincible Four of Kung Fu & Ninja #1"

Who says that being an ass-whupping Action Girl means you can't wear feminine, pretty, opulent clothes? In some works, the two can go hand-in-awesome-but-elegant-hand.

There's hardly any Action Dress Ripping either. These are Impossibly Cool Clothes that don't get in the way while this lady is mowing down hordes of mooks or blowing stuff up. Conversely she is such a good fighter that she is both aware of and able to overcome the disadvantages of her clothing. Not that there can't be Clothing Damage, but expect the clothes to be fine by the next episode (barring getting a new outfit next season).

Note that in spite of appearing impractical at first, a ball gown is actually pretty excellent for this, as ball gowns are designed to afford good freedom of movement (seeing as how they're designed for dancing in) and thus, also good for fighting in, especially in styles that don't require the fighter to be a Kick Chick.

What weapons she uses can vary, from martial arts (even if a skirt would be too narrow or poofy to kick someone) to conventional weapons to the more domestic weapons like Parasol of Pain, Rolling Pin of Doom, and Frying Pan of Doom. Although with those latter three, she has to be directly attacking with them, not just conking a guy on the head.

The clothes could range from a Simple, yet Opulent evening dress and jewelry, to an ultra frilly Pimped-Out Dress. It can even count if the dress is cut to move around, like a Mini Dress Of Power, but it also has to be otherwise too fancy to fight in. May be the result of the villain trying to ambush the heroine at some sort of formal event that she was going to.

A Sub-Trope of Rule of Cool, Rule of Glamorous.

This trope often overlaps with: