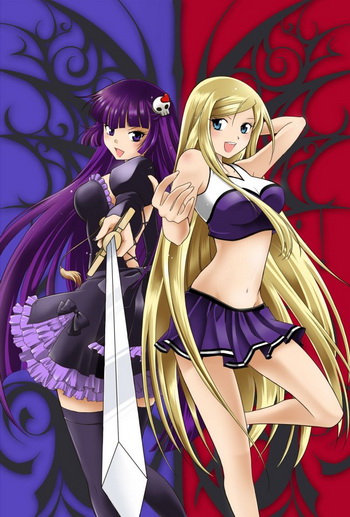 is an OEL Manga created by Adam Arnold with art by Shiei (Volumes 1&2), and Michael Shelfer (Volume 3) and licensed by Seven Seas Entertainment.

As the name implies, its about vampires who happen to be cheerleaders at their local school and mostly follows their exploits as they go about their existence while trying to avoid suspicion and trouble from human and supernatural alike.

Has a sister comic, Paranormal Mystery Squad, which served as a backup feature in Volumes 1 and 2 (they were both equal length, unlike some backup features).

This series follows cryptid (i.e: monster) hunters Stephanie, Katie, and Charlotte (later joined by J.C Summerfield, a representative of PETM and Lita, the ghost of a demon who was forcibly bonded to them) who go across the U.S hunting them. However their rather bombastic and public approach has gained them infamy and the ire of PETM, a organization that's trying to protect the cryptids.

As of volume 3, both series have been merged under the "Vampire Cheerleaders" banner starting with a full on crossover. Vampire Cheerleaders concluded in January 2015, although an interquel spinoff starring Candice Lavenza, called "Frankenbitches", is being drafted.

Both Series (after the merger)

Paranormal Mystery Squad has the following tropes (Vol 1 and 2)