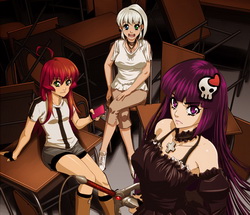 is a manga created by Adam Arnold with art by ComiPa (Vol 1), Ian Chang (Vol 2) and Micheal Shelfer (Vol 3) and licensed by Seven Seas Entertainment. It, and its sister manga, Vampire Cheerleaders, are hosted by Pixie Trix Comix (also host of Ménage à 3, Magick Chicks and Eerie Cuties).

The Paranormal Mystery Squad is a group of three young women who hunt ‘cryptids’, i.e. monsters.