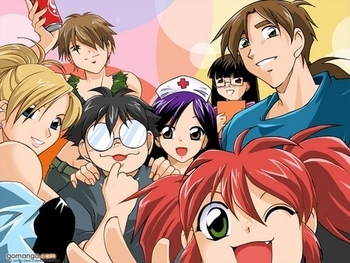 Aoi House is the story of Alexis "Alex" Roberts and Sandy Grayson, two male college students kicked out of their dorm for having "unknown and potentially alcoholic beverages" (they weren't alcoholic) and for showing lewd anime videos in the student lounge, and because during their meeting with the dean about these infractions, Sandy's hamster Echiboo made himself comfortable in the dean's toupee. However, they seem to be in luck when they find a flyer for an anime club, "Aoi House". Just one problem: before the Y fell off of their sign, they were "Yaoi House", and the flyer neglected to mention that it's supposed to be girls and gay guys only. However, seeing as how the housing committee has been on their case to get more members, they have no choice but to let Alex and Sandy stay. Hilarity Ensues.

The original webcomic ran in 2005. It used to be hosted at the Go Manga website, but the site since went down. For a time it was rereleased online at the new Pixie Trix/Zoom Comics

server 5 days a week, but those went offline as well. The entire series is available in print and e-reader formats.