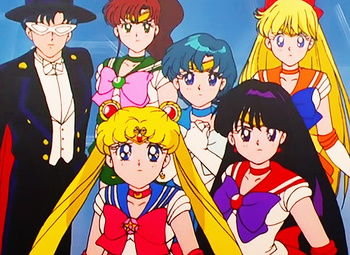 The one on the left.note The blonde one with the red bow?
"One boy, ten girls, wouldn't trade it for the world!"
— The Expository Theme Tune for The Loud House
Advertisement:

That's short for "The one guy associated with an otherwise all-female group". Not in the Harem Genre sense, though. At the most, The One Guy will be in a committed relationship with one of the members — or he wants to be. His membership can range from loose ally to close friend to part of the actual fighting team. Either that or just some guy who rarely ever actually does anything other than serving as a little guy candy. He will usually be involved in plots that require guys, as well as be a non-threatening and harmless crush object for the assorted cast as needed. Could become The Face of the group, should the rest of them lack social skills. May be One of the Girls.

See Chromosome Casting when there are zero members of the opposite sex present in the work. This is also the Spear Counterpart to The Smurfette Principle, although that female may be the main character and still qualify for the trope. Compare to Two Girls and a Guy. Contrast Gender-Equal Ensemble, where the cast has evenly split the gender ratio. No relation to That One Player (who is an experienced player, not necessarily a male) or Those Two Guys (who also don't have to be male; just a pair of recurring extras).

Remember, not all characters who serve as the only male in the group automatically count for this trope. If he is the main protagonist, he does not count as this trope. See Starring Smurfette for such examples instead.