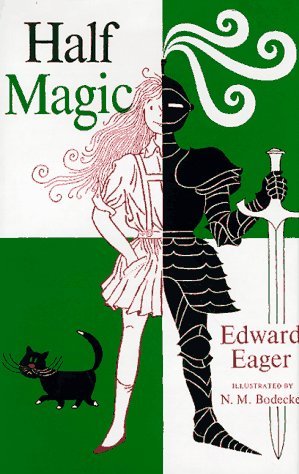 Be Careful What You Wish For; you just might get...half of it.
Half Magic is a children's fantasy novel by Edward Eager, first published in 1954.
Advertisement:

Siblings Jane, Mark, Katharine, and Martha are faced with a long, boring summer with nothing to look forward to but library books. Ever since their father died, their mother spends most of her time working to support the family, leaving the children with not a lot of money or opportunity for summer adventures. All that changes when Jane calls dibs on a nickel lying on the sidewalk, triggering a strange series of coincidences. The "nickel" seems to jump between the children, all of whom quickly find themselves caught in inexplicable jams until they finally realize that the nickel is actually a magical charm that grants wishes by halves. It's a simple matter of mathematics to get exactly what you want, so long as you don't do anything rash—which of course, they do. Their wishes leave them stranded in the middle of the desert, wrecking chaos on King Arthur's court, and causing a mass panic when one of the children accidentally becomes half-invisible.

But sometimes the charm seems to have a mind of its own...almost as if it's deliberately leading the children, wish by misguided wish, toward their own happy ending.