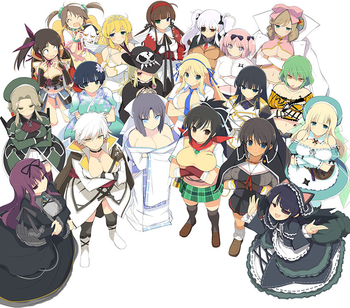 The battle of Life and Hometown. From left to right  Top Row: Murakumo, Minori, Ryona, Ryobi, Yagyu, Hibari, Haruka. Middle Row: Imu, Yozakura, Shiki, Katsuragi, Ikaruga, Hikage, Yomi. Bottom Row: Murasaki, Miyabi, Yumi, Asuka, Homura, Mirai.
Being born into this world, living to protect it to the end, so is the way of the ninja
Beautiful and brave, pushing our bodies to their limits, confusion blooms
Our days are nonchalant and full of laughter
Our nights filled with fear and uneasiness
Hidden from sight in the shadows, to prove that we are alive we rise, toward a vivid light.
— Shoujô-tachi no shinei (Portrait of Girls) Opening

Senran Kaguranote "Senran" is a made-up word using the kanji for flash/brandish and war. "Kagura" comes from a theatrical Japanese dancing by the same name is a series of fanservice-filled Beat 'em Up games, produced by Marvelous Entertainment and developed by Tamsoft. The premise involves different schools of Ninja (commonly referred to as "shinobi" in this series), generally split into two factionsnote Depending on the translation, light/good ninja and dark/evil ninja, who primarily differ in their methods of teaching and executing their employers' orders., facing off against each other, as well as against entities called "Yoma", as they deal with the rigors of ninja training and their daily lives as a shinobi. The ultimate goal of most of these schools is to produce the best shinobi they can, as well as to eventually raise the ninja who will become a "kagura", a high-ranking shinobi who specializes in Demon Slaying.

The focus, however, is on the large amounts of equally large breasts on the majority of the gals, so much so that the series prides itself on this facet, calling its genre "the Hyper-Battle of Bursting Breasts" (emphasis theirs). The games, of course, include copious amounts of bounciness, Clothing Damage, and Male Gaze, among other relevant fanservice tropes.

Yet, despite of all the attention the series garners for its well-rounded, bouncy aspects, Senran Kagura also blends the elements of school life comedy, cute girls doing cute things, and the drama of the harsh world of shinobi, sometimes to great effect. Of course, this leads to the series having somewhat of a schizophrenic presentation, as the director likes to flaunt the fanservice, while the writer is known for writing material darker than what one would expect from a series like this (see the Trivia tab for more information).note Eventually, the director's stance on which aspect of the series to focus on changed. He stated that the series has branched out since the first game's debut, and has been attempting to strike a balance with the fanservice and the more serious story elements. He also specifically mentioned that the 3DS titles will be more story-driven, with the fanservice elements taking a back seat, while the Vita games and other spin-offs will focus on being Lighter and Softer affairs with more of a focus on the fanservice.

As for the gameplay, most games in the series have a focus on attaining high combos while mowing down groups of foes. Missions set up the stages, while the action is broken up by the occasional Visual Novel-styled cutscenes and narration, which provide more details on certain parts of the storyline. During battle, characters are able to perform a "shinobi transformation", changing them from their regular attire to their shinobi form, which gives them more varied combos and the ability to perform devastating special moves called "Secret Ninja Arts". Taking too many hits, however, induces Clothing Damage, causing costumes to lose their HP and defensive bonuses. Costumes can eventually be completely removed by taking too much damage, leaving a character in her swimsuit and with no defenses. However, players can choose to activate "Frantic" mode, which discards all clothing (except the swimsuit) and defenses in order to boost offense significantly. Be warned though, it's much easier to die while in Frantic mode.

The early 3DS titles were side-scrollers, but the Vita game Shinovi Versus branched the gameplay out into a fully 3D battlefield, akin to games like Dynasty Warriors. The sequel to the 3DS games carries over some of this aspect from Shinovi Versus, while introducing new concepts such as tag teams. The sequel is also the first in the series to have playable male characters (earlier games had male characters as NPCs).

When Marvelous later desired for the series to be brought to international markets, XSEED Games took up the call. Senran Kagura Burst was localized and sold in North America as an eShop download title in 2013. Burst had sold well enough that XSEED decided to continue localizing the series, with Senran Kagura: Shinovi Versus for the Playstation Vita being their next title to work on, along with, interestingly

The official Japanese site can be visited here

, but be wary of NSFW content, given the premise. The official site for the localized Senran Kagura Burst is here

, while the site for Deep Crimson is here

Aside from the video games, the series had a few manga adaptations, as well as an anime that aired in the Winter 2013 Anime season. The second season, based on New Link, titled Senran Kagura: Shinovi Master aired during the Fall 2018 anime season.

The director of the series, Takaki, later produced a sort of Spiritual Successor to Senran Kagura, going by the name of Valkyrie Drive, which is essentially a sci-fi/fantasy Senran Kagura with even more explicit fanservice and yuri elements. Valkyrie Drive was conceptualized as a multimedia project, and includes an anime (which is primarily focused on), and two games, each taking place in the same world but within different settings to keep things fresh between them. See those pages for more information.

Compare to Release the Spyce, another series about ninja girls going on secret operations, though with less focus on fanservice. Also compare to similar ecchi series like Ikki Tousen and Queen's Blade. Compare to I=MGCM for the Magical Girl Warrior equivalent.

Games in the Senran Kagura series:

"Troper, dance in the shadows for justice!"