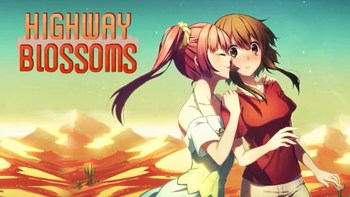 The journal of an old gold rush miner is discovered, and within it are hints to where his treasure may be hidden. A second gold rush of sorts is sparked as the book is snapped up by every would-be prospector in the country, all of whom want to find the treasure first. But Amber hasn't even noticed, distracted as she is by the recent death of the grandfather who raised her. On her way to a music festival she'd planned on attending with him, she comes across Marina stuck on the side of the road and ends up getting pulled into the gold rush as well.

Highway Blossoms is a Ren'Py-based Kinetic Novel made by Alienworksnote which later split into two studios: Studio Élan and Studio Coattails. It was released on Steam

on June 17, 2016. The game is all-ages by default, but a free adult patch can be downloaded on the game's website. An update known as Highway Blossoms Remastered was released on May 18, 2018, which includes some new artwork, full English voice acting, and a Chinese translation.

A DLC called Highway Blossoms: Next Exit was released on September 25, 2020. A follow-up story taking place two months after the events of the main game, it covers Amber and Marina's return to Las Vegas for an alien-themed convention, where they plan to see Tess again for her birthday. They also end up reuniting with Cassi, the candy shop girl, who's determined to start following her own dreams.