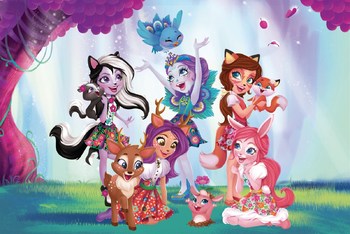 Caring is our everything.
Advertisement:

Following in the footsteps of Monster High and Ever After High comes Enchantimals, a franchise featuring a cast of animal-themed humanoids. These are the titular enchantimals.

The enchantimals live in the world of Everwilde, which they are tasked to protect. To this end, each of them has one or two animal companions of the same species as they are themed after.

The franchise currently consists of dolls, books, playsets, and webisodes. A 60-minute TV special titled "Finding Home" aired on Nick Jr. on November 19, 2017. A TV series called Enchantimals: Tales from Everwilde started airing on July 20, 2018 on Treehouse TV in Canada. Roughly a month later, the episodes were uploaded to YouTube in the US, where new episodes air every Friday.