Series / Too Close for Comfort 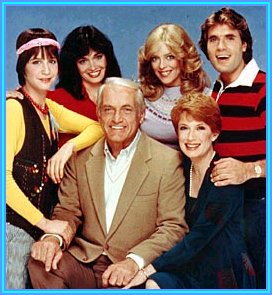 Too Close for Comfort is a family sitcom that originally made its debut on the ABC network on November 11, 1980. The series was adapted from the Thames Television sitcom Keep It In The Family (which debuted nine months before Too Close made its U.S. premiere) from Brian Cooke, who also created the American series with the help of Arne Sultan and Earl Barret, the latter two served as the series' showrunners for the first four seasons. Don L. Taffner (who died in 2011), had successfully helped adapt another Thames sitcom Man About the House into Three's Company, and also produced this series.

Ted Knight starred in the series as cartoonist Henry Rush, who illustrated a comic called Cosmic Cow. Henry is a married father with two young adult daughters Jackie (Deborah Van Valkenburgh) and Sara (Lydia Cornell), and Henry's wife Muriel (Nancy Dussault) is a former singer-turned-professional photographer. The family lives in the top floor of a San Francisco duplex that the elder Rushes own; Myron Rafkin, the man who rented the apartment on the bottom floor suddenly dies, only for the family to discover that he's been living a secret life as a transvestite. Jackie and Sara decide with the apartment now vacant that they should live in it; Henry is hesitant at first, but since it is the only place the girls can afford, he eventually lets them move in at the end of the Pilot Episode.

Jim J. Bullock (whose first name for unknown reasons was always abbreviated as "Jm." in all episodes he appeared in) was brought in three episodes into the series as Monroe Ficus, a nutty classmate of Sara's who seems to constantly annoy Henry every time they meet. Season two also introduced April (played by Deena Freeman), Henry's hippie niece who stays with the Rushes during that season. At the start of season three, Muriel gave birth to a third child, a son named Andrew (who oddly though, was seen less often after Joshua Goodwin assumed the role of the youngest Rush in season five).

In 1983, after ABC cancelled the series following its third season because of a ratings dive it suffered that year due to a failed move to a new timeslot, Metromedia (a predecessor to Fox and successor to DuMont) began producing the series for First-Run Syndication starting in 1984. The show was then retooled for the sixth season in 1986 into The Ted Knight Show, with only Knight, Dussault and Bullock returning, two new cast members added (Pat Carroll as Hope Stinson, majority owner of a newspaper Henry purchased a 49%/51% stake in, of which he was the minority owner and editor; and Lisa Antille as Lisa, Henry and Muriel's new maid) and its setting moved to Marin County, located north of San Francisco. The show continued to be successful under its new format, but did not go on for another season due to Knight's death from cancer that year with its final episode airing on September 27, 1986; all episodes of The Ted Knight Show were then retroactively retitled under the show's original Too Close for Comfort name.

Too (Many) Tropes for Comfort: