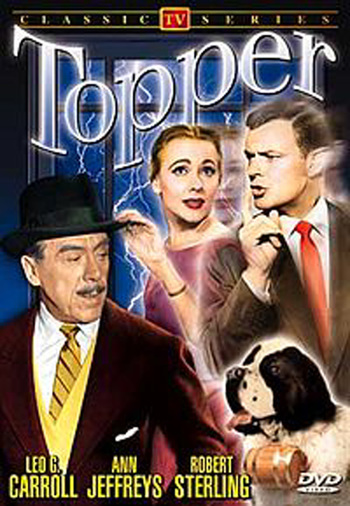 Based on two novels by Thorne Smith and three Screwball Comedy movies, the series starred Leo G. Carrol as Cosmo Topper, a stick-in-the-mud banker who buys a house formerly owned by victims of a freak avalanche.

Topper soon discovers the place is haunted by the ghosts of the couple, George and Marion Kerby, along with the ghost of Neil, the perpetually drunk Saint Bernard that tried to rescue them. The Kerbys try to make up for wasting their lives by helping Topper loosen up and enjoy life more.

This was one of Stephen Sondheim's first writing jobs, and he wrote 11 episodes of the first season.