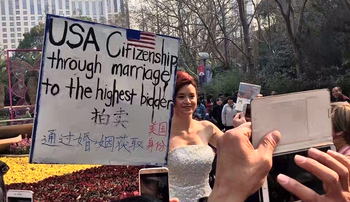 A marriage which occurs solely to allow an immigrant who would otherwise be deported to stay in the country.

Shows operate on the assumption that once you've married a citizen, you're safe. In reality, becoming a permanent resident foreigner can take years even after you're married, although in the US at least one will probably receive a "green card" (permanent residence permit) in less than a year as long as paperwork is in order and the government doesn't suspect fraud.note  The foreign spouse then becomes eligible to apply for citizenship after 3 years with the green card. They still have to meet all the residency and good moral character requirements and must pass the English, literacy, and civics tests. In the US, UK, and some other countries in The European Union, it simply lowers the time you have to have spent as a legal resident of the country to get citizenship from 5 years to 3. note  This usually also applies where children are concerned. Generally, children are considered to be citizens of whichever country they were born in or might be considered citizens if their mother or father has legal citizenship. It does not, however, grant citizenship status to the immigrant parent(s). The child(ren) may, when they reach adulthood, choose to help sponsor their immigrant parent(s) for citizenship if they haven't gotten it already, but it is not an obligation or a guarantee that the parent will become a citizen. In Canada it allows the Canadian member of the couple to sponsor the non-Canadian member for family-class immigration after the couple is married or have cohabited for a year.

This trope has been made notorious by xenophobic portrayals of the foreign party, who can quite easily be made out to be coldly (even gleefully) manipulating the poor, foolish national and dumping him at the first opportunity (extra points if they're saddled with the evil foreigner's children). Don't expect the circumstances which encouraged the foreigner to migrate in the first place to be mentioned, especially if the national's country is in any way responsible for it — e.g. the myriad US — Vietnamese marriages that arose from The Vietnam War and its aftermath.

Alternatively, Romantic Comedy films are also famous for popularizing a more positive variant of this trope, where the arrangement leads to Marriage Before Romance between the two leads (in which case it is also a Romantic Fake–Real Turn).

A favorite trope of Soap Operas. Almost inevitably, the twist is that one member of the couple is usually madly in love with their new spouse...who is equally in love with someone else. Complications typically ensue as the couple tries to maintain the facade in front of the INS and as the "in-love" spouse turns into a Foot-Dragging Divorcee, especially as the green card is processed and the marriage is no longer necessary for the person to stay in the US.

A variant of this trope, popular in the USA, is when couples get married for insurance benefits or tax breaks involved in getting married. Occasionally involves a Mail-Order Bride, who may or may not be a Gold Digger.

I need to get married

I need to get married