Film / How Stella Got Her Groove Back 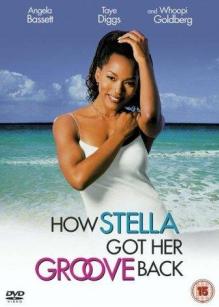 How Stella Got Her Groove Back is a 1998 romance film, directed by Kevin Rodney Sullivan and an adaptation of Terry McMillan's bestselling novel by the same title. The original music score was composed by Michel Colombier.

The movie follows Stella (Angela Bassett), a divorced 40-year-old stockbroker who decided to forgo romance to focus on raising her son and advancing her career. She is persuaded by her best friend Delilah to take a well deserved, first-class vacation to Montego Bay, Jamaica. As she soaks in the beauty of the island, she encounters a strapping young islander, Winston Shakespeare (Taye Diggs, in his film debut), who is 20 years her junior. His pursuits for her turn into a hot and steamy romance that forces Stella to take personal inventory of her life and try to find a balance between her desire for love and companionship, and the responsibilities of mother and corporate executive.