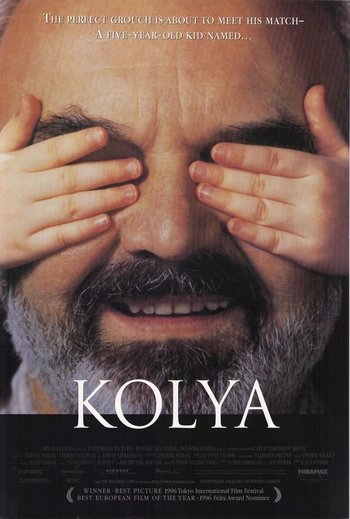 Kolya is a 1996 Academy Award-winning film from the Czech Republic, directed by Jan Svěrák, written by and starring his father, Zdeněk Svěrák.

František Louka (Zdeněk Svěrák) is a 55-year-old professional cellist in Prague, Czechoslovakia in the last days of Communist rule. He used to work in the Czech Philharmonic, but after pissing off a Communist bureaucrat he finds himself blacklisted, reduced to freelance gigs playing at funerals, living a bachelor life that has a surprising amount of girlfriends.

A friend approaches Louka with a scheme to make a tidy sum of money: engage in a fake marriage with a Russian single mother who wants to gain Czechoslovak citizenship. Louka does so, and gets a fat chunk of cash that allows him to buy a car and repay his debts. Unfortunately, this backfires on him when the Russian woman soon skips to West Germany to be with her real boyfriend, thus leaving Louka exposed to trouble with the police for engaging in a fake marriage. It backfires on him even more when the Russian woman's aunt dies in hospital, leaving Louka, as the woman's husband, in charge of her five-year-old son Kolya. Suddenly being a father to a small boy transforms the formerly irresponsible bachelor's life.