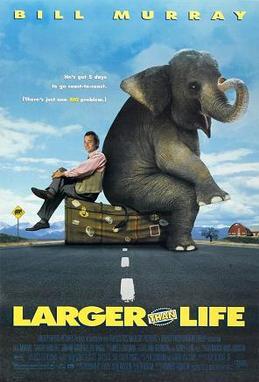 Larger than Life is a 1996 road comedy film directed by Howard Franklin.
Advertisement:

Motivational speaker Jack Corcoran (Bill Murray) learns that his father, who he never knew, was a clown who died recently in Baltimore and left him an inheritance. That inheritance turns out to be an Asian elephant named Vera. Jack is told that he is now legally responsible for Vera, and also liable for the property damage she's caused. Jack needs to find a way to transport Vera all the way across the United States to California, where there are two people willing to take her: the researcher Mo (Janeane Garofalo), who wants to take Vera to Sri Lanka for a breeding project, and the animal trainer Terry (Linda Fiorentino), who works for a circus.

Larger than Life contains examples of: