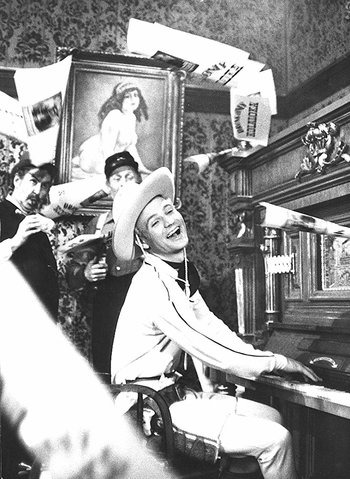 "What's good for Kolaloka is good for the law!"
— Lemonade Joe
Advertisement:

Lemonade Joe, or Horse Opera (Czech: Limonádový Joe aneb Koňská opera) is a 1964 Czech film, a ruthless musical parody of The Western, and a veritable minefield of deliberately planted tropes.

It features a miraculously skilled, clean and morally sound gunfighter named Joenote pronounced deliberately incorrectly as ‘Yo-eh’ who only drinks lemonade who arrives into a crime-infested whiskey-drinking town of cowboys.

Lemonade Joe was directed by Oldřich Lipský. The film is based on short stories and a novel by Jiří Brdečka who was fascinated with the western genre and loved literary and movie experiments. Brdečka co-wrote the script with the movie's director Oldřich Lipský.

Critically acclaimed and dearly loved by the Czech audience, this film is a classic and a true gem among Czech films.