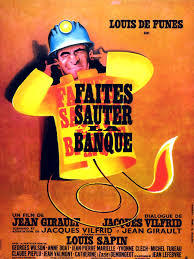 "That's it!!! We'll do it (...) a hold up!!!"
— Victor Garnier (deciding to follow the priest advice on "taking back your belonging in order to save a thief soul")
Advertisement:

Victor Garnier (Louis de Funès) is an humble hunting and fishing Shopkeeper and a father of three. Victim of a 419 Scam by the neighboring banker, Durand-Mareuil (Jean-Pierre Marielle), he wants revenge and plots an holp-up of the bank by digging a tunnel underneath: aided by his wife Eliane, his son Gérard and his two daughters Isabelle and Corinne, they start to build the tunnel the but things don't go has planned...