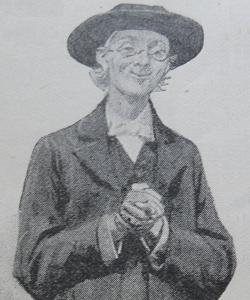 The only one who could ever reach me.
Advertisement:

A spiritual leader for the believers in a small community. In Westerns, the preacher is usually dressed semi-formally in a black broadcloth suit, and may sport a clerical collar, depending on denomination. (Many preachers will have "no denomination given" for the broadest appeal.)

When played straight (or idealistically if you happen to be a cynic), the preacher is a Good Shepherd, a force for reason and peace in the community. He usually understands that violence is an option the law has to take sometimes, but weighs heavily against it for civilians or for less-than-emergency situations. Don't think this makes the Preacher Man an easy target, though—when push comes to shove, they'll fight for what's right with all their might. Even those who are opposed to violence in all its forms can still end a fight by putting themselves in the line of fire, as few villains are either impious enough to shoot a messenger of God or stupid enough to shoot the one person in the town everyone would be willing to defend / avenge.

Towns too small to have their own church may share a "circuit rider" with other communities in the same fix. Like the Circuit Judge, the circuit preacher moves from place to place on a schedule so that any necessary weddings, baptisms or general preachifyin' can take place once a month.

May come with a "preacher's wife", who is usually long-suffering. (Preachers weren't paid much in the Wild West, and had to work any time of day or night they were needed.) The son of a Preacher Man will most likely be either a saint or a devil.

Most often spotted at weddings, funerals and town meetings. May be called on to deliver a Suspiciously Specific Sermon.

Watch out though, as many characters introduced as the Preacher Man are in fact a Sinister Minister or indulging in Bad Habits to exploit the respect generally given a man of the cloth.

In terms of rank, the authority tropes arguably equal are Badass Preacher, Corrupt Corporate Executive, Irish Priest, Pedophile Priest, Schoolteachers, Sexy Priest, Sinister Minister and The Vicar. For the next step down, see Student Council President. For the next step up, see Dean Bitterman.