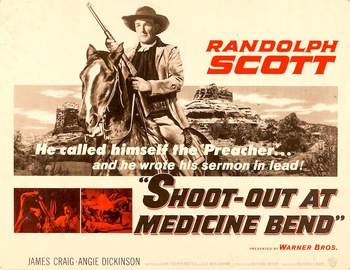 Three army veterans, just mustered out of the service, are going to one of the men's brother's ranch on their way West. Just as they arrive, Indians attack the ranch and kill the brother. The brother was killed because he was using faulty ammunition that did not fire. Buck Devlin, whose brother was killed, vows to find the men responsible for the crime. His two buddies, John Maitland and Wilbur Clegg, accompany him.

Tropes used in Shoot-Out at Medicine Bend include: