Film / One Foot in Heaven 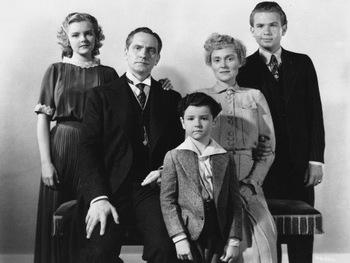 One Foot in Heaven is a 1941 film directed by Irving Rapper and starring Fredric March.

It is an episodic story about William Spence, a Canadian medical student who undergoes a religious conversion and decides to become a Methodist preacher. Taking his new bride Hope in hand, he abandons both medicine and Canada, moving to the United States and becoming a "circuit preacher

" with responsibilities in multiple towns in his district, located in rural Iowa. William and Hope raise children together while he ministers to his flock. Meanwhile, they have to deal with the pressures of life as a rural Protestant minister, some of which are a low salary, various dumpy parsonages (the homes provided for ministers), the strictness of William's Methodist discipline, and the petty narrow-mindedness of the people William serves.

Tropes exhibited in this work: