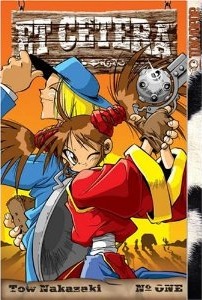 Mingchao's grandfather has passed, so now she decides to travel through the the wild west to Hollywood to become a star. Not without her trusty Eto Gun of course! But wait! The Eto Gun is actually a gun that shoots bullets related to the zodiac animal it got the essence of! And the notorious bandit group, the Syndicate, wants it! Along the way, she is joined by Baskerville, Benkate, Fino and Yaghi.
Advertisement:

A manga created by Tow Nakazaki and distributed in America by Tokyopop. It spanned 9 volumes.