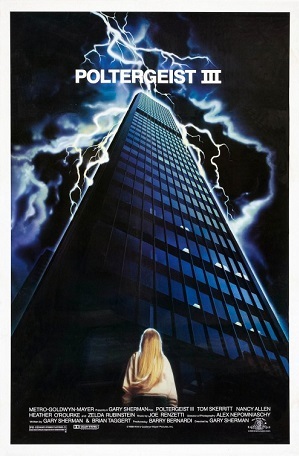 They're back, again!
Tangina: Carol Anne and Donna are not in that room.
Bruce: Well some goddamn thing is.
Tangina: O yes. Anger, rage, evil — they are in that room.
Advertisement:

Poltergeist III (1988) is the second of two sequels to the horror film Poltergeist.

Carol Anne (Heather O'Rourke) has now been sent to live with her aunt Pat (Nancy Allen), uncle Bruce (Tom Skerritt) and Bruce's teenage daughter Donna (Lara Flynn Boyle), in a high-rise apartment building in Chicago. She goes to a school for gifted children and has to have sessions with a psychiatrist who doesn't believe in any of the supernatural stuff, and who's convinced she's just making everyone believe things. But soon the malevolent spirits, in particular that of Kane, start following Carol Anne again and terrorizing the building. This particularly gets out of hand one evening when Pat and Bruce have to attend a social event and leave Carol Anne in the care of Donna.