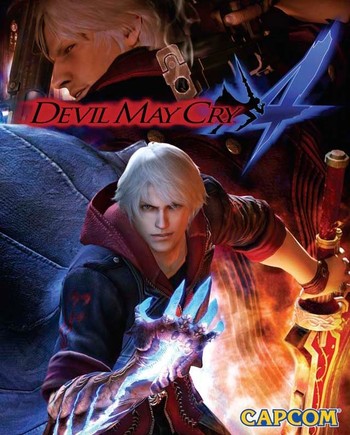 Set free the Devil inside.
"Now I know...[...] This hand was made for sending guys like you back to hell!"
— Nero
Advertisement:

Devil May Cry 4 is a Stylish Action Hack and Slash game developed by Capcom for the PlayStation 3, Xbox 360, and PC, originally released in February (the consoles) and June (PC) 2008. The game is the third Numbered Sequel in the Devil May Cry series after 2005's Devil May Cry 3: Dante's Awakening.

Some time after DMC3, 1, and 2 (in that order), on the island nation of Fortuna, a young man with a demonic right arm named Nero is attending a religious service where his childhood friend Kyrie is performing when infamous devil slayer Dante crashes through the ceiling and shoots the sermonizing chief priest right in the head. The resulting events ensue as Nero is tasked by Credo, Kyrie's brother and a high-ranking official of the church of the Order of the Sword, to chase down Dante and make him answer for his crime. Things get more complicated when Nero starts coming across Hellgates spitting out demons across the island and the more sinister elements of the Order he's working for.

Gameplay is an evolution of the systems developed in 3, focusing mostly on new series protagonist Nero, his motorcycle engine-equipped sword Red Queen, and his Devil Bringer right arm, which allows him to grab enemies and pull off powerful stylish attacks on them. Partway through the story, control switches back over to Dante, who plays similarly to how he did in 3 with a wide variety of melee and ranged weaponry, but now, there's an unrestricted Real-Time Weapon Change and an instantaneous Style-switching system. Several returning moves and abilities are also improved in terms of utility and animation speed.

In 2015, seven years after its original release, Capcom developed a remastered version called Devil May Cry 4: Special Edition and released it on PlayStation 4, Xbox One, and PC. New features included Turbo mode and Legendary Dark Knight difficulty (which were in the original PC release, but now implemented on the console versions for the first time) as well as three whole new playable characters: Vergil, Lady, and Trish.

Aside from the main game, there are also supplementary materials and spin-offs for Devil May Cry 4, such as Deadly Fortune, a Japan-only two-volume novelization written by the game's scenario writer and published on 2009, Refrain, a simplified iPhone port of the game released on 2011, and three pachislot machines; the first two pachislot machine spin-offs (respectively released on 2013 and 2016) used the in-game assets, though the latter was titled Devil May Cry X: The Last Judgement Pachislot and contains additional cutscenes and lines that apparently tied Vergil's story closer to 4. The third pachislot, CR Devil May Cry 4 Pachislot, was released on 2018 and uses a different graphics engine to retell the events of the game's Special Edition.

This continuity took a hiatus when Capcom released the reboot/Alternate Continuity DmC: Devil May Cry in 2013, but would return with Devil May Cry 5 in 2019.

Tropes for this game and its spin-offs include:

While in Devil Trigger with full concentration, Vergil cuts through space and time in an awesome display of power.

While in Devil Trigger with full concentration, Vergil cuts through space and time in an awesome display of power.