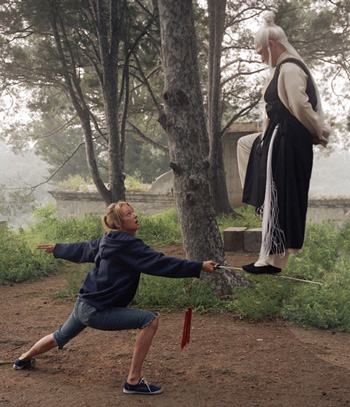 "From here you can get an excellent view of my foot."
Advertisement:

Two warriors are in the midst of a Sword Fight. One makes a flashy move with his conspicuously large sword that's guaranteed to reduce any mortal to tomorrow's worm feast. But as the dust clears, he is in for a nasty surprise: his enemy is balancing on the blade of his sword in an Ass Kicking Pose, which is the perfect place for him to run across the blade toward his unguarded opponent.

This should be impossible — one combatant cannot support or balance the other this way, especially by mistake — but that is ignored by Rule of Cool. This can characterize the runner as The Lightfooted, so agile and dexterous that they seem able to ignore gravity on a whim. It may further suggest that the nimble character is Just Toying With the other, teasing their opponent by how gracefully they can avoid an attack. It can be Justified if the weapon's wielder has a Super Strength or is much larger than their enemy. Compare Weapon Stomp.

Not to be confused with the notably blade-free Blade Runner, or the villain from Tensou Sentai Goseiger who is named for the film.