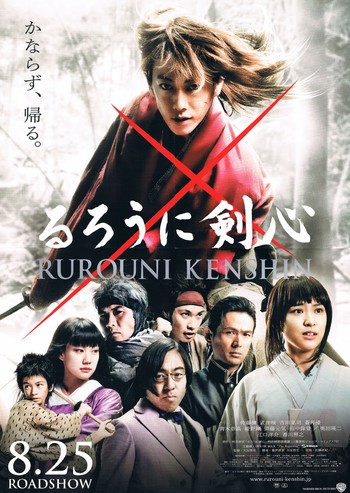 The journey begins.
"Killing gives birth to hatred. And hatred kills in its turn. To break that chain, I carry a sword that will not kill."
— Himura Kenshin
Advertisement:

On the last day of the Bakumatsu, former assassin, Himura Kenshin (Takeru Satoh), made one simple vow: to never take a human life again. Wandering for ten years afterwards allows him to stay true to his word, while all of Japan breaks away from shogunate rule to modernize. One day, Kenshin meets a girl, Kaoru Kamiya (Emi Takei), who not only runs her father's Kendo dojo, but also shares the same peaceful interests as him. But when an uncaring businessman (Teruyuki Kagawa) and a blood-thirsty murderer (Koji Kikkawa) attempt to make their own marks on the country, Kenshin must step up and fight for this new, better world that he cherishes.

This film is followed by Rurouni Kenshin: Kyoto Inferno.

♫ Just give me a reason
To keep my heart beating
Don't worry, it's safe right here in my arms
As the world falls apart around us
All we can do is hold on, hold on! ♫