Just Toying with Them 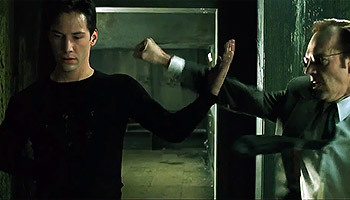 "Do you mind? I just achieved enlightenment today, I'd rather not do anything violent."
Vegeta: Freak! Are you not taking this seriously?!
Perfect Cell: Should I be? I'm sorry, I thought we were still warming up.
— Dragon Ball Z Kai
Advertisement:

This is when a more powerful character, likely villainous, decides to give a weaker character a "chance" to beat them somehow (not necessarily in combat) by setting limitations on themselves or holding back. They could agree to play a game with arbitrary rules, or they could hold back in battle to keep it entertaining. One thing's for sure, though: They have no intention of actually leveling the playing field and playing fair. They just think they can beat the other character with their hands tied behind their back. If it turns out they can't, or they get bored, they'll stop trying and just use more force.

It's a hard situation for the weaker character, who is pretty much at the other's mercy, but it can be a lot better than if the stronger character was going at full strength. The stronger character may get so arrogant the weaker actually has a chance of beating them before they realize it. Even though they're prepared to cheat, the rules may turn against them anyway. If they're holding back in a fight while the other is trying seriously, they might end up not being so much stronger after all due to the difference in effort. Or they might be distracted while a third party foils their plans right behind their back.

If the stronger character plays weak and reveals they're applying this trope only some time into the confrontation, it's a case of some form of I Am Not Left-Handed. But they might just be clearly the more powerful one from the start (or somewhat ambiguously but not hiding it) with the weaker party having no chance but to play along anyway.

The role of the more powerful character is well suited for a powerful Reality Warper, as "He snapped his fingers and won" would be a boring plot, but such powers give endless opportunities for toying with others.

Super-Trope to Excuse Me While I Multitask, Combat Uninterruptus and I Need You Stronger. For obvious reasons, tends to be a David Versus Goliath situation. Other tropes that may come up include Heroic Second Wind and Near-Villain Victory. Compare Willfully Weak, Complexity Addiction, Evil Gloating, My Defense Need Not Protect Me Forever, and Cherry Tapping, which all resemble this in different ways. A No-Nonsense Nemesis will not be caught doing this. In a fight, Curb-Stomp Battle is likely what would happen if the stronger character didn't hold back... and it might anyway. A Mercy Lead will be a form of this trope if it's intended to make no difference.

Alternative Title(s): Toying With Their Enemy