Literature / Masquerade of the Red Death 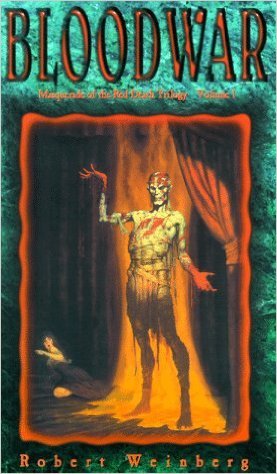 The Masquerade of the Red Death trilogy was written by Robert Weinberg for the Old World of Darkness, specifically tying in to Vampire: The Masquerade.

Dire McCann is a private detective and rogue mage of the Euthanatos tradition, working for Prince Vargoss, the vampire Prince of St. Louis. Alicia Varney is a billionaire businesswoman and ghoul, serving Justine Bern, the Sabbat Archbishop of New York City. Both of them are older than they look, with mysterious ties to two older vampires considered mythology to the current Kindred.

The Red Death is a vampire of unknown lineage, with strange control over fire. He insists that only he can stave off the coming Gehenna, and only if he's granted control of all Kindred, whether Camarilla or Sabbat. But for some reason, he also demands the deaths of two humans ... Alicia and McCann.

Advertisement:
This series contains examples of: