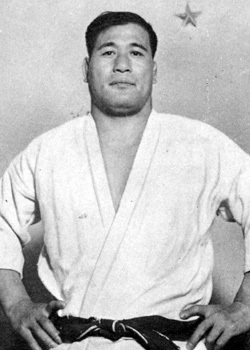 "Kimura no maei ni Kimura naku, Kimura no ato ni Kimura nashi." note "There never was a Kimura before Kimura, and there will never be a Kimura after Kimura."
—attributed to Tsuneo Tomita, son of Tsunejiro Tomita, about Kimura.

Masahiko Kimura (1917-1993) was a Japanese Judoka and Professional Wrestler, considered the greatest judo practitioner in history, a pro wrestling pioneer and one of the first Mixed Martial Arts fighters. He trained in the Kodokan school run by Jigoro Kano, turning out to be a promising rookie and gaining sound accomplishments for his age, among them three all Japan championships. A crazy training fanatic, he swore not being defeated ever, and also trained in karate with Gichin Funakoshi and Mas Oyama to round his skills. However, after leaving the school and failing a career experiment with pro judo, he became a professional wrestler in order to gain money for his ill wife. He roamed the world and eventually landed in Brazil, where he defeated Brazilian Jiu-Jitsu figure Hélio Gracie in a famous match. At his return to Japan he founded Kokusai Pro Wrestling association and resumed competing by invitation of Rikidozan. Kimura formed a star tag team with him and helped to found a branch of Japan Wrestling Assocation which brought Mexican lucha libre to Japan for first time, and also competed in Brazilian vale tudo again. After leaving the business, he returned to judo as director and trainer until his death by lung cancer in 1993.

"The Demon of Tropes":