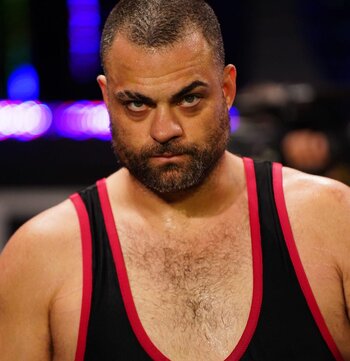 Edward Moore (born December 12, 1981) is an American Professional Wrestler from Yonkers, NY best known for his work in CHIKARA and Ring of Honor as Eddie Kingston. He debuted in 2002 as a member of the second class to graduate from the CHIKARA Wrestle Factory. He was introduced as 1/2 of the tag team the Wildcards with BlackJack Marciano. They feuded with UltraZERO (UltraMantis and Mr. ZERO) before going on to feud with F.I.S.T. (Icarus and Gran Akuma.) The team's run ended when Marciano retired in 2004. In 2005, Kingston started his feud with Chris Hero, which would cross over into CZW and IWA Mid-South. He has gone through a series of face and heel turns during his career. He has also competed for Pro Wrestling Guerilla, WSU (when it was Wrestling Superstars Uncensored) and many other independent promotions. Along with being the CHIKARA Grand Champion, he has also been a 1x CZW World Heavyweight Champion

He is in no way connected to Kofi Kingston.

"These Tropes are the Last of a Dying Breed":