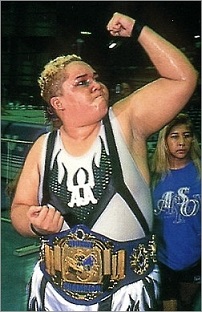 "God made the Devil just for fun
When He wanted the real thing, He made Aja Kong!"
— From her theme song, "Jungle Emperor"
Advertisement:

Erika Shishido (born September 25, 1970) is a Japanese-American Professional Wrestler as Aja Kong. She started her career in 1986 at the age of 16 under her own name, becoming Aja Kong in 1988. She was a long-time regular in All Japan Women's Pro-Wrestling and helped establish the ARSION promotion as one of the top monster heels. Among her achievements, she is a 4x AJW WWWA World Tag Team Champion

as Erica w/Margarete (Awesome Kong). She made her PPV debut at WWE Survivor Series 95. Kong has also competed for FMW, CMLL, CHIKARA, Dragon Gate, All Elite Wrestling and many other promotions. She was inducted into the AJW Hall of Fame in 1998 and the Wrestling Observer Newsletter Hall of Fame in 2006.