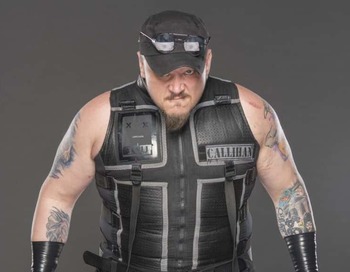 Sami Callihan (born Samuel Alton Johnston on September 1, 1987 at Bellefontaine, Ohio) is a all-rounder/brawler-style professional wrestler trained by Les Thatcher, Cody Hawk and Shark Boy, currently performing for Impact Wrestling and is best known for competing in Major League Wrestling as Sami Callihan and Lucha Underground as Jeremiah Snake. He also had a stint on the NXT brand of WWE as Solomon Crowe.

Aside from those promotions he also fought on Dragon Gate USA', CZW, EVOLVE, Ring of Honor, Pro Wrestling Guerrilla, Full Impact Pro and All American Wrestling. He has... quite the amount of accolades

These are the tropes of The Draw!

open/close all folders
As Sami Callihan
As Solomon Crowe
As Jeremiah Crane/Snake
See his tropes at the LU character page.
Advertisement: