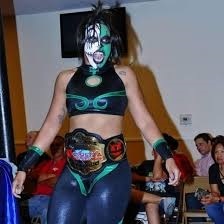 "You gon find out tonight!"
Advertisement:

Camille Ligon is an African-American female Professional Wrestler. She debuted in 2013, wrestling mostly in showcases for KnockX Pro Wrestling Academy as Blue Holiday. She did not take off until emerging as Holidead in 2015 and has since competed for various National Wrestling Alliance territories, and multiple independent promotions around the U.S. as well as for World Wonder Ring ST★RDOM in Japan. As the Twisted Sisterz, she and Thunder Rosa were the first female team to ever hold the NWA Western States (renamed International) Tag Team Titles

, and she is a 2x former RWA Women's Champion